The G.O.A. has spearheaded SAT Awards for its young members to celebrate their successes and encourage them in their educational endeavors. The awards are sponsored by Nora & late Alfred Braganza and Tony Azavedo.

About our S.A.T. Award sponsors 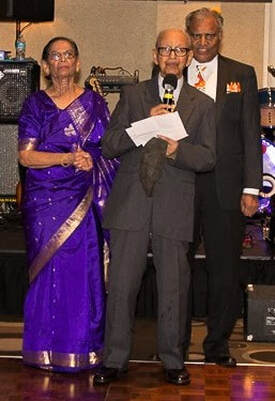 Alfred & Nora Braganza
Mr. Alfred Braganza took the Curso Complementar de Letras in Goa, India, which he passed with distinction, from the Portuguese National Lyceum in 1948 and then got his Masters degree in Arts with a first class, at St. Xavier's College, Bombay. He stood first among the students of M.A. and M. Sc. and won the St. Xavier's Silver Medal in 1958.

From 1952 to 1968, he worked in Bombay and Goa for A.I. Radio, as an Assistant Editor cum Programme Executive, along with the late Advocate Vishnu Nain, in charge of Konkani programs. He headed the Portuguese division of A.I.R, Goa. He was the official interpreter to the Government of India, to interpret the speeches of P.M. Nehru and leaders of the former Portuguese & British colonies, gathered at the International Conference on Portugues Colonialism in New Delhi and Bombay in October, 1961. In 1965, he was sent on special assignment to the Films Division of the Government of India. He wrote two film documentaries: Textiles for Export and Kutch Aggression. In 1970, he got a Masters degree in Film & Television at UCLA, California. He completed 8 California teaching credentials, and taught at LAUSD for 24 years. Mr. Braganza also authored two books in Portuguese, Hosanas a Terra Mae India & Concao da Alma, and The Discovery of Goa.

Mr. Braganza passed away on January 7, 2018, following an illustrious life. The G.O.A. appreciates his dedication as a founding member & past president, as well as the founding sponsor of the SAT award for high school students, for the last 19 years. His wife Nora Braganza is continuing his work of honoring high scoring students with SAT awards.

Tony Azavedo
Mr. Tony Azavedo, C.P.A. is well known in Goan circles both in Los Angeles and Orange counties. Nobody can say, who is that tall guy with a perennial smile lighting up his face. After his initial training back in Tabora, Tanzania, he landed as an accountant to the vast sprawling Archdiocese of Los Angeles in 1969. Soon he learned what it takes to climb the ropes of the American corporate ladder: experience, experience, experience. Meanwhile, he took his C.P.A. exam which he passed with flying colors. Then he acquired higher experience in some well known C.P.A. firms: Deutsch, Linderman & Katz and Klaiman Accountancy Corporation, both from Beverly Hills, Thomas Mallo's in Inglewood, L.A., before he found a partner to open his office in Newport Beach. Soon he realized he could fly on his own wings. Tony set up his own CPA practice in Irvine in 1982, ever attracting customers. He has been the co-sponsor of the G.O.A. SAT Award for the last 15 years.

The GOA thanks the following donors for helping sponsor our events:

The Seely Revival Band was born at the GOA camping events at Camp Seely. A group of music lovers led by Ray Teles jammed every night to entice their audience into dancing through the wee hours. A band gradually formed, and performed at the Summer Ball. In 2019, the band took the leap into performing at the prestigious Christmas ball, with great success.